The game is close to completion and will release October 10th, here's the final development blog highlighting some of the additional features and final tasks before release.

There's nothing as frustrating as getting stuck in a game. When completing a level in Frick, Inc. it won't just unlock the next level but also the level after that, that way you'll always be able to skip a level if you're stuck or get too frustrated. At first all levels were unlocked from the very start, this however didn't feel nice as there was no progression in the game.

I've started supporting the Linux platform a while ago, porting my games and software over to Linux (Ubuntu specifically). The process has been painless and is a breeze especially if you've done it once before. I've installed Ubuntu in a virtual machine so I can quickly transfer files and test builds, after that I'll send a build to people running Linux natively to test.

During production some models weren't used, got replaced or cut from the game entirely. To give players a little bonus I've added a gallery feature where they can view all models up close.

This is the first commercial title I'll be publishing but I have been creating numerous of game assets over the last decade. So I thought it'd be a nice gesture to include some game assets with the game, inspired by Frick, Inc. That'll allow developers that get inspired by the game to create their own. 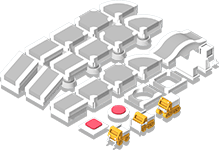 This has been the final development update, Frick, Inc. will release October 10th!

Thanks for supporting Linux

The game will be available October 10th, sorry about that - seems like an issue with Itch.io that it already displays a buy button :(

No problem! Love all the things. Looking forward to it.