A downloadable game for Windows and Linux

Defend the planet from incoming meteors! Rotate the planet to protect important structures, build a space port and leave the planet.

The game can be played using a mouse or gamepad. Windows and Linux compatible, not compatible with other operating systems.

Can you pleaseee make it available for Mac too

This game is actually a lot of fun. Nice work

Works perfectly on Linux! Thanks for porting!

It works on Linux! No problems! LinuxMint 19.3

Awesome, thanks for testing! :)

I found a cool stratagy

If you dont worry about spinning the planet then at the end every round you jitter click the 30 point towers, you can very quickly get to 1600. At which point you can just buy a bunch of the 200 point things to build the spaceship

Works great for both easy and hard

thanks for the game

The whole thing was a polished, round gaming experience! The whole animations and the camera rotation felt so slick. <3 It's a simple, but effective game design. :) That's why I included the game in one of our compilation articles about the Ludum Dare 38 as well as in the related showcase video, along with two other wonderful games. <3 Thanks for your work, looking forward to your future projects!

nice to play! cute design! a bit of incidental back music could not be bad. dro pa me a msg. :D :D free coops.

No source code will be shared, sorry. We do have a blog article about some aspects of development; http://kenney.nl/blog/making-of-techium-eclipse

Ok thanks. Nice game by the way

But can I buy the source code? I want to buy the code for the camera and planet rotation. It's so smooth.

Really cool concept. I went into the game thinking it was a 3d Missile defense kinda thing, but there aren't any guns. That simplicity of concept makes that game rather refreshing and difficult. Only complaint that I have is that the mouse controls seem to be a bit sensitive, the rotations occur faster than i expect. Perhaps rotations should occur on a ramp, so they start slow and ramp up speed to a limit. I don't think they should slow down to a stop though, the stop should be sudden when the player releases the button.

DEAR LORD THIS IS HARD AS HELL TO PLAY WITH A LAPTOP TRACK PAD - BUT I DID IT!

GREAT JOB, GAME IS A TON OF FUN

Awesome, thanks for creating the video!

Nice Game, fun to play but i dont like it that you cant calculate if the meteor hits your building or not. When the marker is not on the strucutre but there is a big meteor coming, this metor can hit the structures nevertheless.

Yeah, certainly something that can be improved in an update! Thanks for the feedback, glad you did enjoy it :) 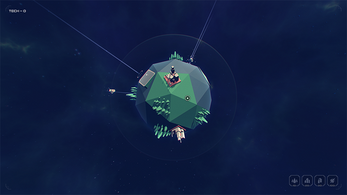 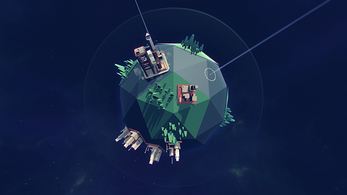 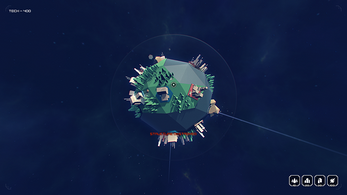