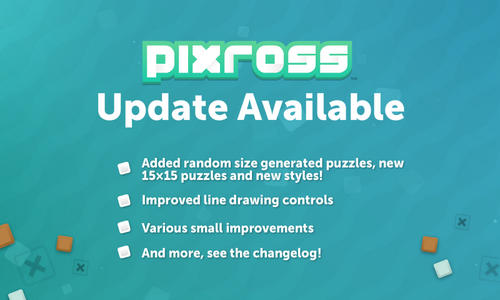 A new update has been released for Pixross adding new content and features, see the full changelog here:

Switching drawing modes
You can press spacebar to switch between free draw and line mode, you can also hold shift (left or right) to temporarily switch. The option you select in the options menu will be the default mode when starting a puzzle.

Improve line drawing
The game will now always attempt to draw tiles in a line whether your mouse cursor is near the line or not. It'll also stick the tile selector to the line column or row.

Again, thanks for your feedback and reviews - all of these features were added after being requested by players. Stay tuned for more updates in the near future!

Overall this is a great game. Thank you! I really liked some of the puzzles being put into categories and not just difficulties, I also appreciate the non standard boards. I hope to see maybe some 25x25 or even 30x30 boards in a future update, since most other games don’t go above 20x20

That said. As someone who has played most Picross games the already mentioned flaws are a bit annoying, but something I’d like to mention is that the style itself could use a bit more contrast. I have some trouble being able to tell the board appart from one glance. The overall board lines and scratched out fields could be a bit darker in my opinion.

Hello! As a Picross addict I was very  excited to see this in the Bundle for Palestinian Aid, and I've basically already completed it. However, in the process I have found two puzzles that do not seem to be possible to logically solve with the clues given, those being Animals 12 and Miscellaneous 04. This is when playing with automatic clue fading turned off, as I found that setting was too spoilery—it's marking off numbers even when it's still ambigous exactly which clue number the filled in square refers to. I did also run across a number of puzzles where there towards the end of the puzzle was more than one possible way to fill in the remaining numbers,  the majority of them being a fifty-fifty on the final squares. I didn't note down which ones those were, though.

Other than that, I quite enjoyed it! Though I was a bit confused by  my continued use of the style machine  getting me way over  100%.

Chiming in to agree with all of this! Animal 12 also got me, and I was also surprised about the style machine taking me over 100%...

But other than that, it's a great picross game, I'm enjoying it. :)

In addition to the non-unique solutions and style machine (should really count the number of unlocked styles instead of attempts), I have two other major issues: